Who would have the courage to carry such a heavy past with us? / Yue Song5 (3)

By Staff6 December 2021No Comments

Home » Who would have the courage to carry such a heavy past with us? / Yue Song

This piece is from my chamber opera Tattoo, it is an area for mezzosoprano.

It tells the story of a woman, Lian, who experience the was in the 1940s and who was forced into sexual slavery by the Japanese army but survived the war eventually. This area is about a love story after she experienced this trauma, and heavy past.
Time went by, people almost forgot what happened in this village and Lian, she met her love; she regarded him as the light of her life, he brought hope to her, made her begin to expect a future life with him. She thought she had finally found good fortune. However, he began to see her less as soon as he heard her story and one day he just left without a single word.

Lian couldn’t take this reality, she lied to herself that he would come back someday. Waiting for him became her daily life, but deep down she knew that she was waiting for someone who would never come back. Tortured by her reality, her personality was split in two, one part of her lived in false hope and the other part of her understood the truth. People might sympathize with her experiences, and those of others like her, but “who would have the courage to carry such a heavy past with us?” she asked herself at the end. 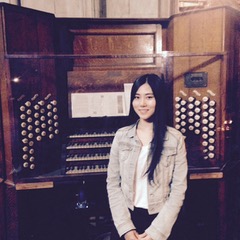 In 2018, she came to Ireland to commence PhD studies under Professor Gráinne Mulvey in TU Dublin Conservatory of Music and Drama.

She originally comes from a classical music background, and she is interested in a lot of different styles of music and artforms, especially theater and literature – for this reason she’s always been particularly interested in opera and likes to write her own librettos.

She has composed works in various genres, such as opera, orchestra, Chinese orchestra, various combinations of ensembles, solo pieces, and electronic music.